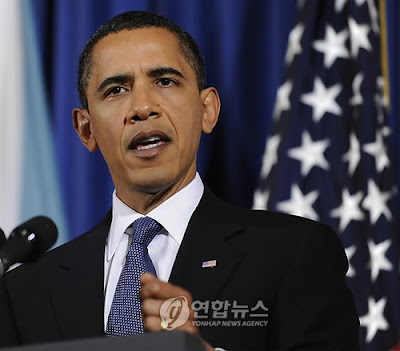 Obama made his remarks in an exclusive written interview with Yonhap News Agency just hours before he left Washington for an eight-day trip that brings him to South Korea, Japan, China and Singapore.

"This is the choice that North Korea faces," Obama said. "North Korea has the opportunity to move towards acceptance by the international community if it will comply with its international obligations and live up to its own commitments. By taking irreversible steps towards the complete elimination of its nuclear program, North Korea will be following the peaceful path towards security and respect."

Obama's remarks follow a rare inter-Korean skirmish Tuesday, which crippled a North Korean patrol ship that *intruded[* This word itself is in controversy because of the different dispute on the NLL] South Korean waters and ignored warning shots, prompting media speculation that North Korea is trying to attract U.S. attention ahead of Obama's visit to Seoul next week.

Secretary of State Hillary Clinton Wednesday said the naval clash will not affect U.S. plans to send Stephen Bosworth, special representative for North Korea policy, to Pyongyang "in the near future" as part of the six-party process.

The State Department said Tuesday the U.S. point man on North Korea will visit Pyongyang "sometime between now and the end of the year" to discuss resumption of the six-party talks, deadlocked over U.N. sanctions on North Korea for its nuclear and missile tests.

Obama said his administration is ready to have a bilateral dialogue with North Korea within the six-party framework.

"We believe the six-party talks are the best framework for reaching peaceful resolution and that the September 2005 Joint Statement clearly lays out the goals we must achieve," he said. "We are open to a bilateral meeting as part of the six-party process if that will lead to an expeditious resumption of the denuclearization negotiations."

The 2005 deal calls for the North's nuclear dismantlement in return for hefty economic aid, diplomatic recognition and establishment of a permanent peace regime on the Korean Peninsula to replace the fragile armistice that ended the 1950-53 Korean War.

The U.S. president, however, warned that the North will continue facing international sanctions unless it abandons its nuclear ambitions.

"North Korea's attempt to acquire weapons of mass destruction and the means to deliver them is destabilizing and represents a threat to peace and security," he said. "This is why the United Nations Security Council adopted strong measures under Resolution 1874 and why the U.N. members states are enforcing the provisions of those resolutions."

The U.S. sees the North's recent conciliatory overtures as the result of international financial sanctions and an overall arms embargo effectively cutting off revenues from arms sales, the only source of hard currency for the impoverished communist state.

Philip Crowley, State Department spokesman, said Monday, "We have to believe that North Korea has felt, you know, some of that pressure. So you've seen a shift in their strategy, the so-called charm offensive that they have engaged in for the past couple of months."

Jeffrey Bader, senior director for East Asian affairs at the National Security Council, last week dismissed the North's gestures as traditional brinkmanship, saying, "Once the cycle of provocations was completed, North Korea sat back to wait for a newer package of concessions from the U.S."

Obama said that North Korea will be a top issue at the summit meeting with South Korean President Lee Myung-bak in Seoul next week.

"North Korea's nuclear and missile capabilities are a grave concern, not only to the Republic of Korea and the United States, but to the international community," he said. "This is an issue that President Lee and I have discussed in depth and we will hold consultations on this and other subjects in Seoul later this month."

"President Lee and I are in full agreement on the need to achieve a comprehensive resolution of the nuclear, missile, and proliferation problems, and cooperation between our two governments is extremely close," he said.

The grand bargain envisions a package deal in which members of the six-nation talks provide Pyongyang with security guarantees, massive economic aid and other incentives in return for a complete deal that does not necessitate further negotiations.

A senior White House official last week said Lee and Obama do not differ on the grand bargain.

"The old approach of trying in small increments is to give a little bit to North Korea and hope that will lead to some kind of progress," he said. "That approach has had a serious flaw. Instead, what is necessary is for there to be a more comprehensive resolution of the North Korean nuclear problem.

"My understanding of the grand bargain concept is that there should be a definitive, comprehensive set of measures on economic assistance and other political areas that would move North Korea out of the darkness into the community of Northeast Asia, and that is an approach we completely agree with," he said.

The idea comes as a result of loopholes in the two six-party deals signed by the Koreas, the U.S., China, Japan and Russia in previous years that outlined phased denuclearization for the North.

"The [Feb. 13], 2007 agreement is nothing more than a declaration on North Korea's nuclear dismantlement that lacks a road map for its implementation," a senior South Korean official said recently. "The Sept. 19, 2005, agreement, which is about North Korea's nuclear reactor and reprocessing facilities at Yongbyon, does not address North Korea's existing nuclear arsenal."

http://nobasestorieskorea.blogspot.com/2009/11/blog-post.html
Thursday, November 5, 2009
Text Fwd: USA to launch ICBM on Nov 18 from Vandenberg Air Force Base to the Marshall Islands

http://nobasestorieskorea.blogspot.com/2009/09/text-fwd-us-braces-for-possible-nuke.html
Wednesday, September 9, 2009
Text Fwd: 'US Braces for Possible Nuke War With NK'
Posted by NO Base Stories of Korea at 4:56 AM