It was just an accident that this site manager happened to meet again the Kiryung women workers including their leader, Kim So-Yeon, who were doing one-man protests in front of the Duksoo Palace, in the center of Seoul, in the morning of Aug. 2. Despite rain and hard struggle, the workers smiled brightly. For six years, the Kiryung workers' struggle has been the symbol of the irregular workers' struggle in South Korea where about 60 % are irregular workers. You can see the background and issue of their struggle in the heartbreaking video forwarded as in the below. It is a wonderful video that greatly makes visible the courageous lives and struggle of the young woman workers- if not, hardly visible in the brutal South Korea Society. Click the images for larger view. 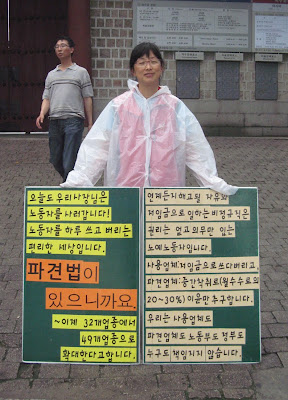 Kim So-Yeon, leader of the Kiryung Electronic union workers has been a respected staunch activist. Her recording 90 day hunger strike in 2008 has gotten attention on the situation of the Korean irregular workers from Korea and abroad, such as in the City of New York where the Kiryung workers went for protest against the US Satellite company Sirius to whom the company Kiryung had gotten the subcontract. 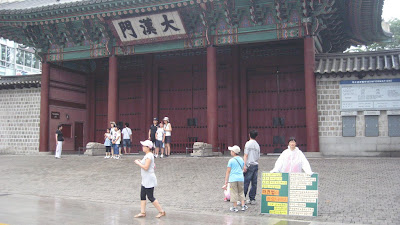 To see her again in front of the Duksoo palace was both glad and sad. The palace was the last residential place of the King Gojing of the Chosun dynasty (* Chosun was the name of Korea until 1897) King Gojong suffered from and struggled against the annexation of Chosun to Japan without success during the Japanese imperialism. Even though Korea was liberated from Japan 65 years ago, the workers' lives have been same-the exploited under the capitalism. And with the issues unsolved yet, she is still struggling. The history of Korean woman workers are both of pride and sadness. *The below is a wonderful English subtitled video (three part series) on the Kiryung workers' tenacious and heartbreaking struggle for years, that has not ended yet. The director is C.S. Kim

'A recent trade union fact-finding mission on workers' rights violations in Korea expressed deep concerns over the treatment of the workers belonging to the Kiryung Electronics Workers Union Local of the KMWU. The Korean company, which manufactures satellite broadcast receivers, digital satellite radios and global positioning systems for automobiles and other uses, supplies equipment that is installed in many vehicle models of major automakers offering Sirius satellite radio.'

We are not disposable! Kiryung union struggle in Korea (Part I) (Video URL)

We are not disposable! Kiryung union struggle in Korea (Part II) (Video URL)

We are not disposable! Kiryung union struggle in Korea (Part III) (Video URL)

Posted by NO Base Stories of Korea at 7:39 PM